While coaching and teaching at Bellville High School, Arp High School, and Garrison High School, I was also the FCA club sponsor. There were a lot of kids who wanted to be a part of it. A small percentage of kids were there so they could just put it on their resume with no real commitment to the club and some were there just to be in the yearbook. That is totally fine. That doesn’t bother me. But, I did put a point system in place just for kicks. I wanted to reward the kids who made a real commitment to the club. And, regardless of points, ALL kids got to be in the yearbook photo. (insert smiley face here).

I dug out an old newsletter from the archives (November 1998, to be exact). I kept meticulous notebooks back in those days. Now I love and use OneNote for that. Scanning all of that old stuff and putting it in my OneNote is on my list of to-do’s…someday…when I have a lot of free time. But, I digress.

Here’s a snip from that ancient newsletter: 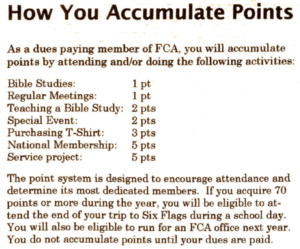 I think the dues were $5 a student and used for donuts at meetings, most likely. This system worked well and it encouraged the kids to do things they may not have done before. It also gave me an objective way to determine who could run for an office the following year. I wasn’t always a fan of absolute popular vote.

Obviously, the point of assigning points to things is always to encourage and motivate people. I’ll explain how I did this in my own classroom instruction in a future post.